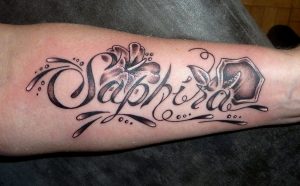 Tattoo Lettering is very popular recently, thanks to the communication of globalisation. Therefore, we are increasingly approached to many different languages at the same time. But the problem is that most of us don’t even know the meaning of most of the lettering meanings at all. Not to mention the consequences of getting the lettering tattoo that you don’t even know its meaning.

The text of tattoo lettering is usually symbolic in nature – the name of a loved one, a pet, a group, a belief, a cause. It can also be in multiple languages:

But for some reasons, you must be careful enough when choosing a lettering tattoo for yourself. I have listed down 3 major precautions you should take into consideration when deciding which tattoo lettering to be inked on your skin.

The Meaning of The Lettering

It’s is crucial to know and learn the meaning of the lettering you have chosen, since there will be no way back if you have tattoo the lettering with the bad meaning. Get a tattoo in a language you don’t understand without checking it with a friend first. Especially for Chinese lettering, it would be harder to choose the right one since the combinations of 2 words may means totally different thing eventually.

The Suitable Size of The Tattoo Lettering

The next thing is to consider the size and placement of the tattoo. Since tattoo fade overtime as ink is absorded into the skin. Just imaging what happen to your small lettering tattoo that have been fade. It will looked like a “BI” dot on your skin.

You should get some professional advices fro your artist. Of course, they will tell you that tattoo lettering in particular, has a minimal size. Don’t go for small and unreadable letters.

Some of the groups use tattoo lettering for indication of their group norms. Please don’t ever let anyone pressure you into getting a specific lettering tattoo. As tattoo designs is an unique thing for your personality and your life as well. Be unique and be yourself…it’s a personal choice, and one that you have to carry for the rest of your life.

Think of it for a while. What if you have leave the group few months after you just done the lettering tattoo that same with them.. What’s the meaning of that to you anymore?