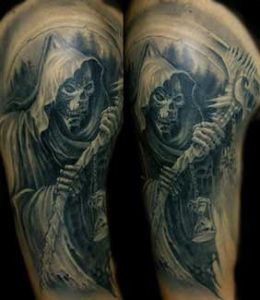 Grim reapers tattoos are a very popular choice of tattoo flash. This image is typically associated with death and destruction. The grim reaper is the character that symbolizes the journey between this world and death. A creature that guides the souls of the dead to their next home.

Some people look at this creature as just a greeter that will help the dead transition to their next life. They don’t look at the grim reaper as necessarily an evil creature. People usually choose the grim reaper image for a tattoo to remind them that death is inevitable and inescapable. Some people embrace the darkness and evil overtone of this symbol of death. Others prefer to think of the reaper as a representative of the journey we make between live and death. That is why the reaper is sometimes used to pay tribute to a loved one that has passed.

The artwork hasn’t altered much over the years either. The reaper dates back to the Middle Ages during the years when entire cities and communities were being wiped out by rampant disease. It was also a popular choice for warriors and used as a symbol of bravery.

This figure is typically depicted as a skeleton wearing a dark, hooded robe. In one hand he is usually holding a large sickle and the other hand is sometimes pointing or making a gesture with the pointy finger curled up in a motion that says “come here”. You’ll find variations of poses and props. For instance, the grim reaper riding a motorcycle but usually there’s no question that the basic image is recognizable as the reaper. It’s very common to have him riding a horse. The basics of this image haven’t altered much over the years. Usually the reaper is depicted as a full skeleton and in other designs, the face is one big gaping dark hole which can give an even more eerie feel to the picture.

Usually tattoos of the grim reaper are produced with shades of black and gray ink although some people like to add some color.