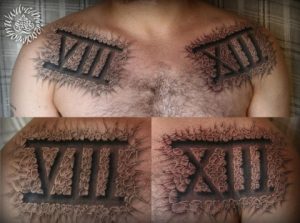 These roman numerals are examples of some amazing work and mastery of shading to create depth.

The client chose to keep the meaning of the roman numeral eight and roman numeral thirteen private…but that does not keep us from admiring the work and skill that went into their creation, does it?

Made to look like they were chiseled out of cobblestone, the numbers appear to go deep into the skin. Great shading and perspective. Great look to the cobblestone and how it fades out as well. The gray coloring of the stones gives them a lot of texture and helps to make the tattoos really pop.