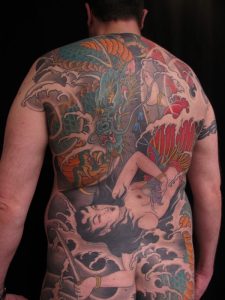 The Tamatori hime tattoos are very popular across many countries and through many culture,the meaning and reason for wearing them are often similar though.

The story that gave the Tamatori hime tattoos included dragons,pearls,gods and a brave woman who nearly sacrificed herself for what she saw as the greater good. Therefore there are images of bravery ,sacrifice and fighting with dragons that could be included.

The story is usually fairly constant in what it says but it allows interpretation of how the characters looked and therefore how they were portrayed,originally they were shown in drawings and paintings which would then begin to introduce different interpretations.

The dragon has a basic form that is fairly standard in terms of body shape and head design but this still allows plenty of variation.

The dragon can be long in length with a massive twisting tail or can be shorter with a tail similar in length to the body. The dragons colour can be a standard green one,it can be red or brown or if drawn can be left as outline with some detail rather then colour.

The Tamatori hime tattoos focus on many parts of the legend from the dive to the fight with the dragons to the scene with the gods watching over her.

In order to make the most of the images they can also be split up over the body in smaller designs. Maybe on opposite shoulders, opposite arms or on other areas such as the feet.

The dragon is probably the most common part of the Tamatori hime tattoo probably as it can be drawn in so many ways and can be as small or as large as you wish. There are also possibilities for colour and background as well as how the dragon is shown.

As always do your research on both the designs and the person who will apply the designs. Study the characters for their meanings and history and then design your image,with work you could end up with a special and striking design.